In 1967, the actor Patrick O’Neal and his brother Michael opened O’Neals Saloon across from Lincoln Center. But the NYS Liquor Authority threatened to revoke O’Neal’s license unless the word “saloon” was removed from its name. This was due to an antiquated law dating back to the end of prohibition that made it illegal to serve alcohol “in such premises referred to as saloons.” Craftily the “S” was changed to “B” and was now a staple watering hole known as O’Neal’s Baloon. 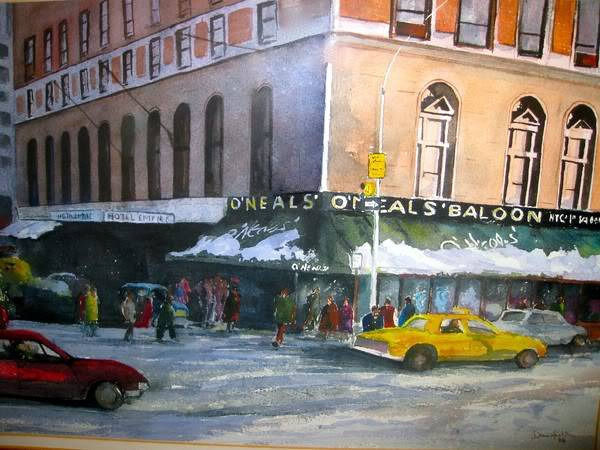 Now long gone from the NYC scenery, except in memory, the venue will be forever embraced during the final scene from Annie Hall. It is from the window of O’Neals that looks out on the corner with Lincoln Center in the background.

The day brought in the locals for a lite bite, and at night the audiences from a Lincoln Center performance would stop by for a drink before making their way back to the suburbs.

This was a bistro that I would walk in during the day and possibly run into those Lincoln Center creators. At times, I have observed from a distance Leonard Bernstein tapping a pencil on the table or George Balanchine and Jerome Robbins discuss an NYCB production with each other.

An intensity of nostalgia was riddled within its walls. A 16-foot long painting “Dancers at the Bar,” by Robert Crowl was impressively displayed above the long bar. Many of the personalities in the artwork were dancers from the NYCB. Ironically, those who spent their long days at a ballet ‘barre’ would relax an hour or two for a meal at the ‘bar’ of O’Neals.

My favourite dishes were the black bean soup with sour cream, hand-cut French fries and what I felt was the best burger in the Lincoln Center area in1968. O’Neals will always be fondly remembered.