Without a doubt, one of the staple dishes in New York (when we speak about fast and cheap food) are hot dogs. It’s comforting to know that some form of affordable sustenance still exists. While it is true that a hot dog can be equally good (or bad) at any place in the city for its simplicity, when you try different hot dogs in New York you realize that just is not valid. 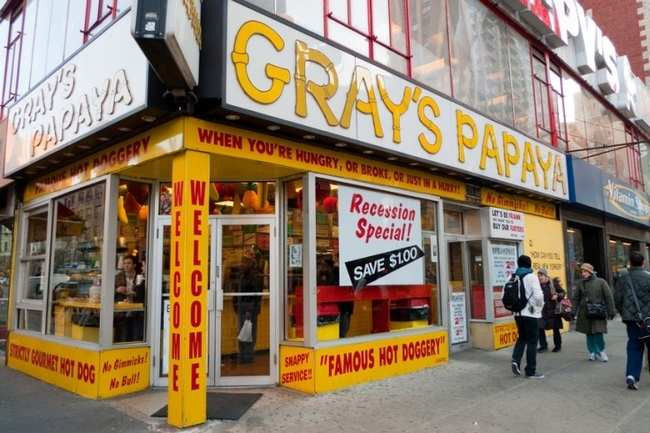 Besides the hundreds of existing street carts offering Sabretts at as a cheap alternative (and, truthfully, of tasting good), but undoubtedly, and together with several other chains throughout NYC, one of my favourite hot dogs were those of Gray’s Papaya. The papaya fruit drink sold there may be the reason the hot dog with a variety of toppings seemed to stand out for me.

Gray’s has been a long term fixture at 2090 Broadway on 72nd Street for more than 45 years. It is impossible to miss when exiting the West 72nd Street subway station, as it is directly across the street. It is open 24 hours a day year-round. This flagship stand was my go-to spot back in the day at when my school lunch money was running low by the end of the week. Sit down establishments were out of the question, and Gray’s came through with a great quick meal at a low price. Although the lines can be long, you will have a hot dog and drink in hand within minutes in this walk-in, stand-up and stuff your face kind of place.

There were other Gray’s Papaya’s that I recalled passing by but never tried. One was located in the Village on Sixth Avenue and 8th Street, and another in the Garment center on Eighth Avenue and 37th Street. These two mentioned are no longer in operation, but a more recent Gray’s was added at 8th Ave and 40th Street. 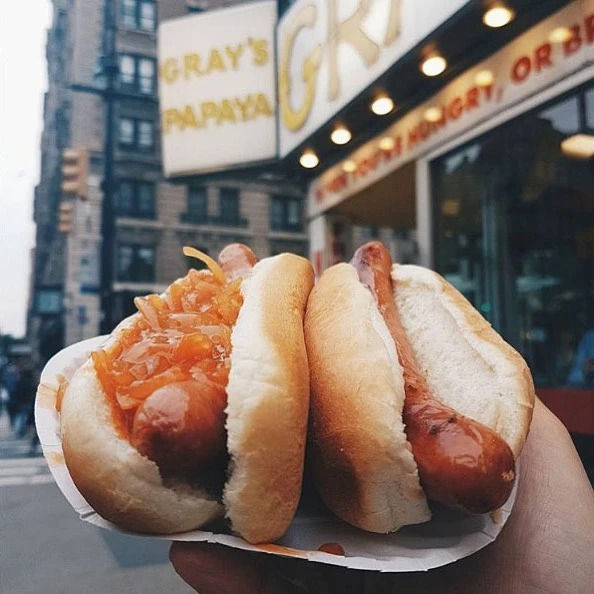 Two franks and a medium-size drink were aptly titled the “Recession Special” since the 1980s. It still reigns as their best seller. Over the years, the price may have risen. However, it is still remarkably reasonable at under $6 at Gray’s midtown location and under $7 on 72nd Street; this and the Staten Island Ferry are the most fantastic bargains one can find in town.