Paddy’s Clam House located at 215 West 34th Street (between 7th & 8th), was known for seafood. Since original venue opened in 1898 in the Bronx. Paddy (Joseph Patrick) White then moved his success story to Manhattan in the 1940s. He passed on in1964 but his restaurant’s legacy still ran for a few more decades. 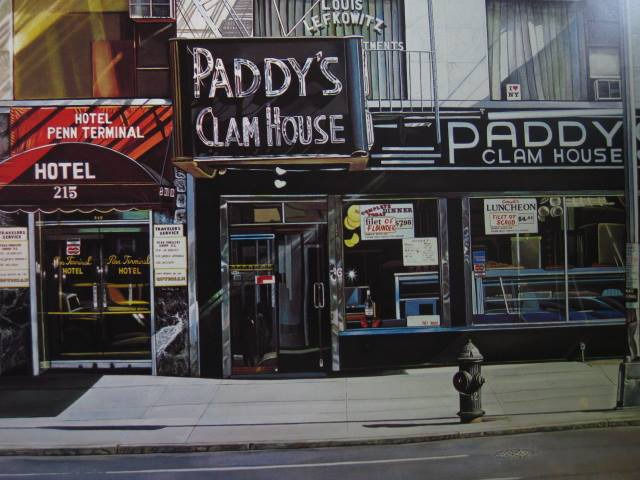 Paddy, born in Philadelphia, learned his trade at the oyster bar of Delmonico’s. Paddy established himself as a legend in the 1940s for his rapid skills of opening-up clams. He attained a record of opening 100 clams in 3 minutes, 20 seconds. It is claimed that this number has never been beaten by anyone else the entire decade.

Paddy’s West 34th St. restaurant had an impressive record too. The staff served 1,000 people daily; disposed of 5,000 lobsters, 50 bushels of shellfish and 1,700 pounds of fish per week.

I discovered Paddy’s through word of mouth. It was across from Penn Station, and nearly everyone in the Garment Industry raved about its menu and low prices. I started dining there at least once a week around 1971. Although there was much variety, I tended to order the same items totalling approximately $6. It consisted of the clam broth, a whole broiled lobster and for dessert, the delightful Paddy’s Nesselrode Pie. Clams and oysters on the half-shell were on ice; cold and fresh. I would choose this as a quick eat and run meal when the time was not at my leisure for a complete meal.

The venue reflected traces of its age, and simplicity was its keynote; there was nothing fancy about it. Its dining room was furnished with wooden chairs painted in a particularly old-time shade of deep apple green, and black and white tiles donned the floors. Every table was packed, and the noise level and great eats was a massive part of its charm.

Sadly Paddy’s Clam House closed years ago, and I am not sure exactly when Paddy’s disappeared. Still, I am tempted to say that they closed somewhere around the early or late 1980s or perhaps before. I know I must have dined here for at least 8 years non-stopped, and it was indeed a personal favourite.